In honor of the success of the Iron Man film, I'm posting images of various armored characters I have drawn for pitches over the years. 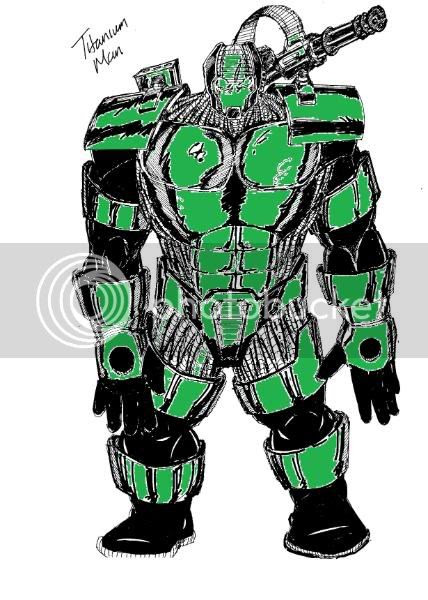 Titanium Man - this armor is based upon the Heroes Reborn Iron Man armor. I had a plot where the Gremlin [who had been killed by Iron Man] is also reborn on the Counter-Earth where the Heroes Reborn stories took place. The original Titanium Man armor never really appealled to me. The cable-like pseudo-musculature was a real pain to draw, as was the chain machine cannon. 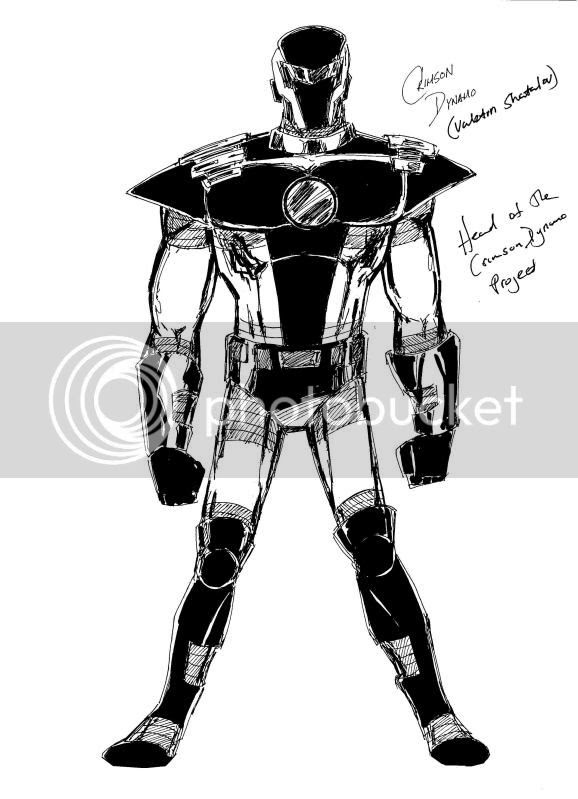 Crimson Dynamo [Valentin Shatalov] - there was Iron Man issue where Tony Stark switched minds withValentin Shatalov - the Crimson Dynamo [at that time]. It ended with Shatalov being carted off for treasonous activities [committed by Tony Stark in his body] with the implication that he was to be executed. Shatalov reappeared in a later storyline with a more advanced Crimson Dynamo armor that was somewhat similar to Iron Man's. I just cleaned it up and tweaked it to make it more "Iron Man-ish". My apologies for the cropped bottoms of this and some of the other images. 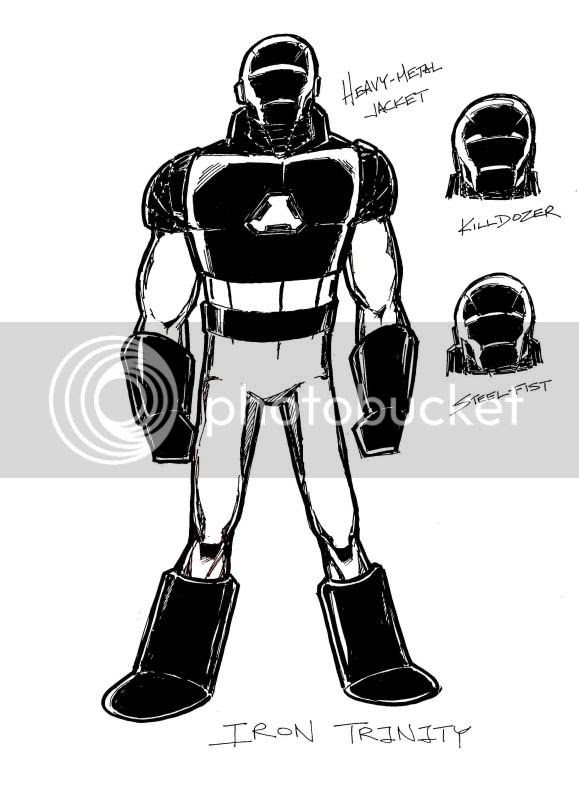 Iron Trinity - these villains appeared in a Marvel Super-Heroes story where they fought The Falcon and haven't appeared since [that I know of]. I cleaned up their armor and changed their helmets to give them a little more individuality and to make it more look like The Iron Monger armor which their armors were based upon. 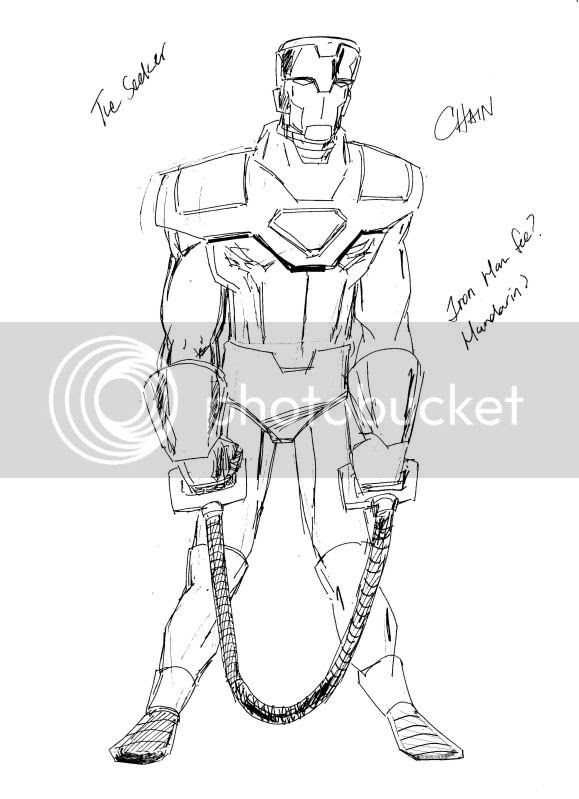 Chain - a member of the armored mercenaries known as The Seekers. His main weapon was an energized chain. 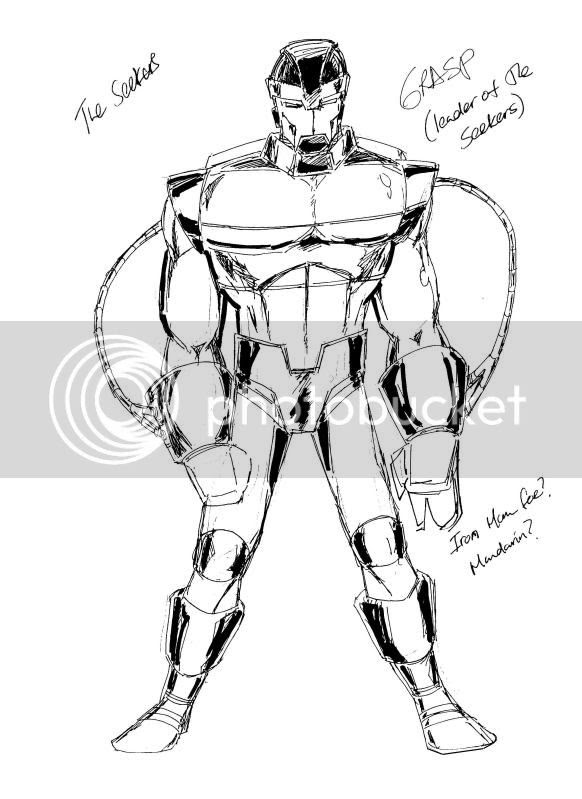 Grasp - a member of the armored mercenaries known as The Seekers. His main weapon were electrified gauntlets. 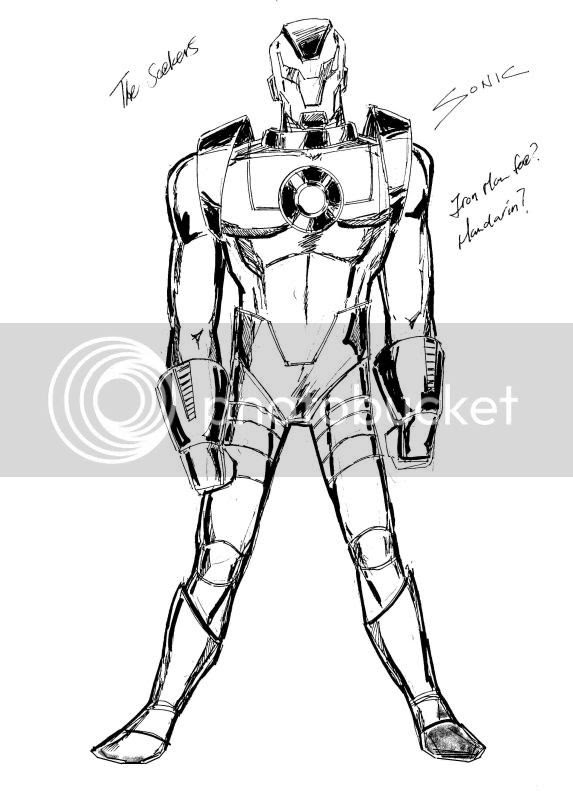 Sonik - a member of the armored mercenaries known as The Seekers. His main weapon was a sonic cannon which I incorporated into his chest plate. For each armor, I streamlined and simplified the look. 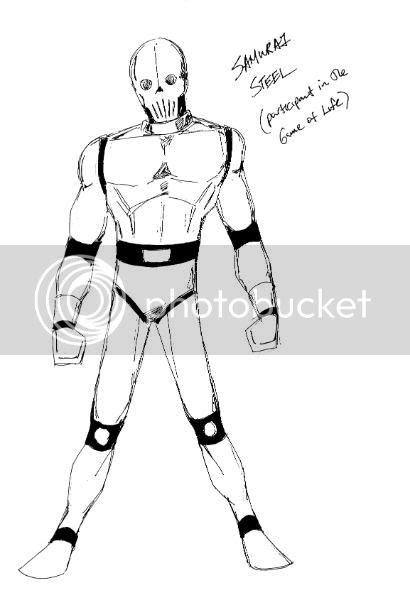 Samurai Steel - The character was a victim of the atomic bomb blast at Hiroshima or Nagasaki and wanted revenge against Stark whose father worked on the Manhattan Project. Borned deformed, he was a brilliant scientist and inventor. He created an armor which rivaled Iron Man's. He seemingly died at the end of the issue of Iron Man he appeared in. My storyline had him return and tied his storyline to that of Lady Deathstrike and the Cyberai [X-Men villains]. I didn't really change the look of the armor but made it more formidable by having it made of adamantium. 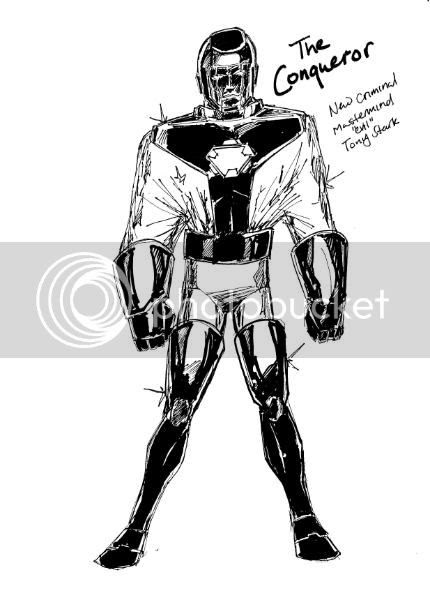 The Conqueror - a parallel Earth version where Tony Stark killed and then assumed the identity of Kang the Conqueror. My story idea involved him fleeing the Earth 616 after a fight with the Council of Kangs. My thinking was Tony Stark was his own worst enemy -- in idea which has since appeared in recent Marvel comic books [click this link for an example].

There was one Iron Man which I thought up but could never create a good design or plotline for. His name....Adamantium Man.

Kudos to the website Iron Man Armory which is a great resource.

Hi there! I am your newest follower I will have to show my kid your drawings he's 4 and he sure will like them!