A long time ago in a galaxy far away, I once submitted a series proposal for the Marvel Comics characters Power Pack. Here are some of the designs... 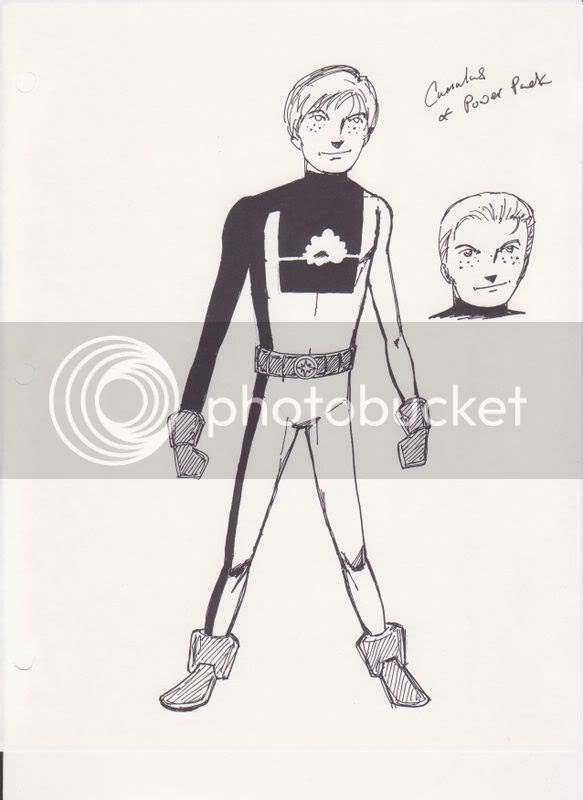 Jack Power aka Cumulus: Cumulus means "mass" in Latin [mass as in physics and not the religious kind] and since his disembodied form looks like a cloud, I thought it would be a good name. In the original comic books, Jack is portrayed as being into sports. I wanted to keep that aspect of his character but that doesn't mean he isn't smart and versed in the sciences. 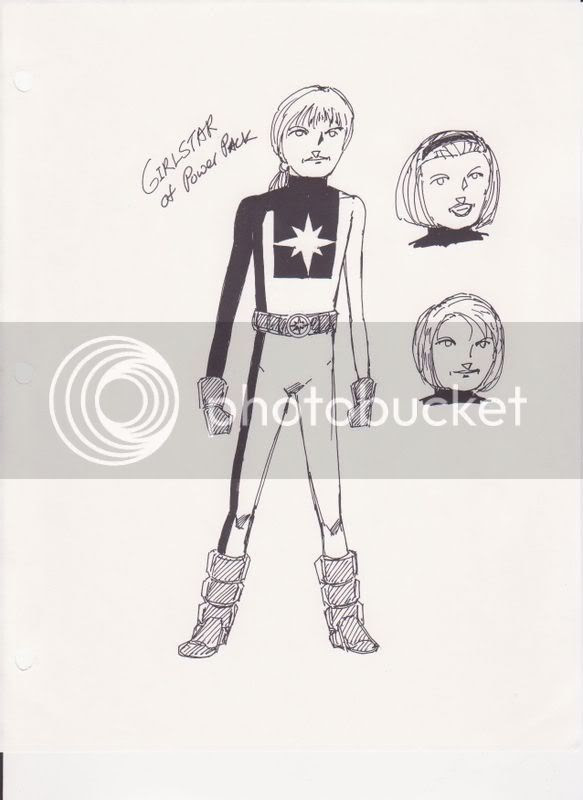 Katie Power aka Girlstar: It was simple and obvious name that I'm a little surprised that I hadn't heard it before -- she's a girl and she's generates light and energy like a star. 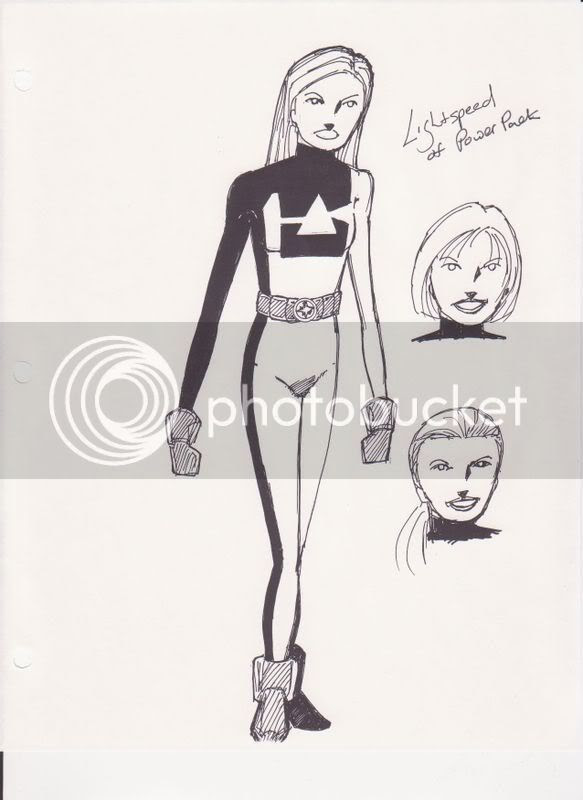 Julie Power aka Lightspeed: The only member of Power Pack to keep her original name. I had her as the de facto team leader and most grounded team member. 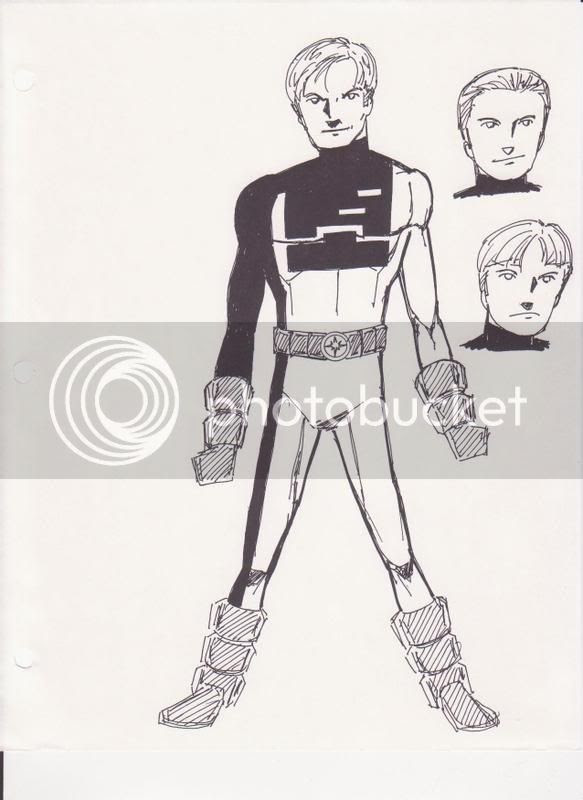 Alex Power aka Powerhouse: Now in his late-teens, I gave his body more tone and definition because he's older and because his powers are related to physical strength. Note -- I modified the costume designs from the original costumes by adding the belts and differentiating the gloves and boots of each member. 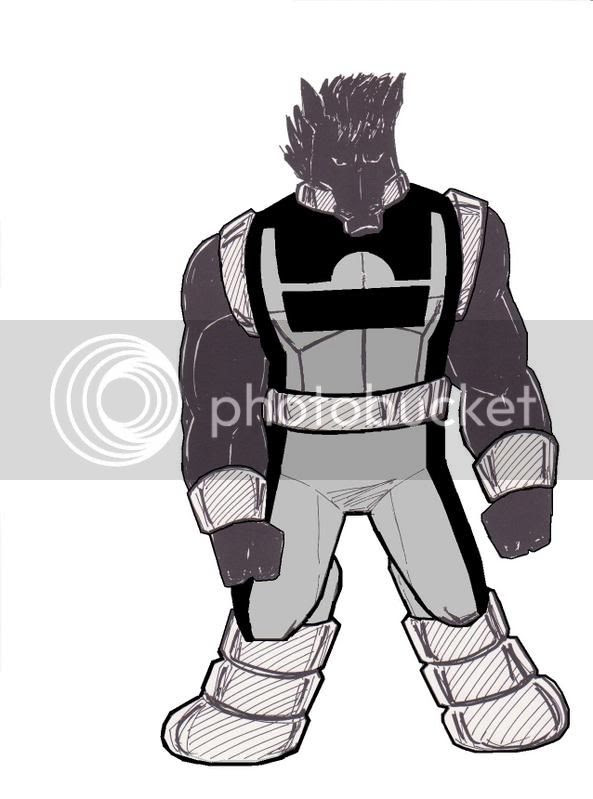 Black Horse: Villainous Kymellian alien with the power to manipulate his density and convert kinetic energy into superhuman strength. The symbol on the chest of his costume is the astrological sign for Libra aka "The Scales" which the Biblical rider of the black horse was carrying [and thus representing Famine]. 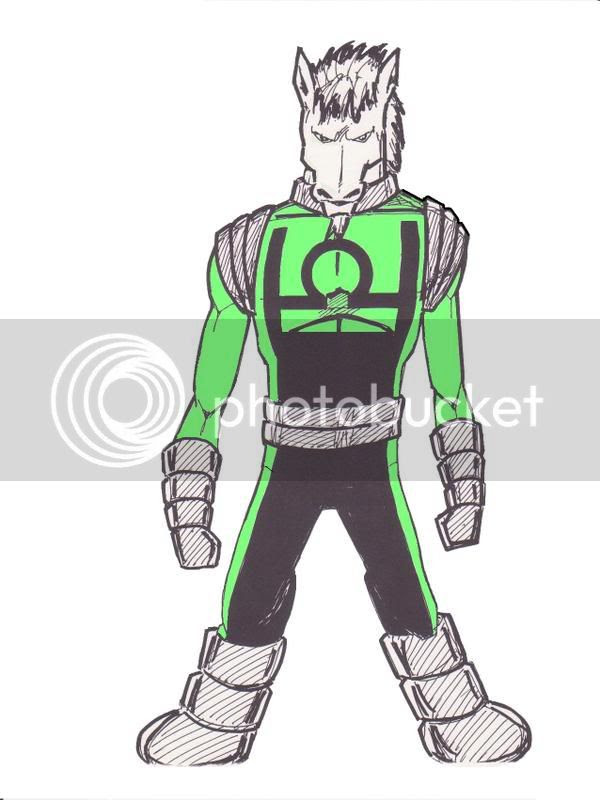 Pale Horse: Villainous Kymellian alien with the power to absorb the life energies of whoever he comes in contact with, i.e. a "death touch". He is the leader of the quartet of Kymellians nicknamed "The Four Horsemen" by Jack Power. The symbol on the chest of his costume is the last letter of the Greek alphabet "omega". 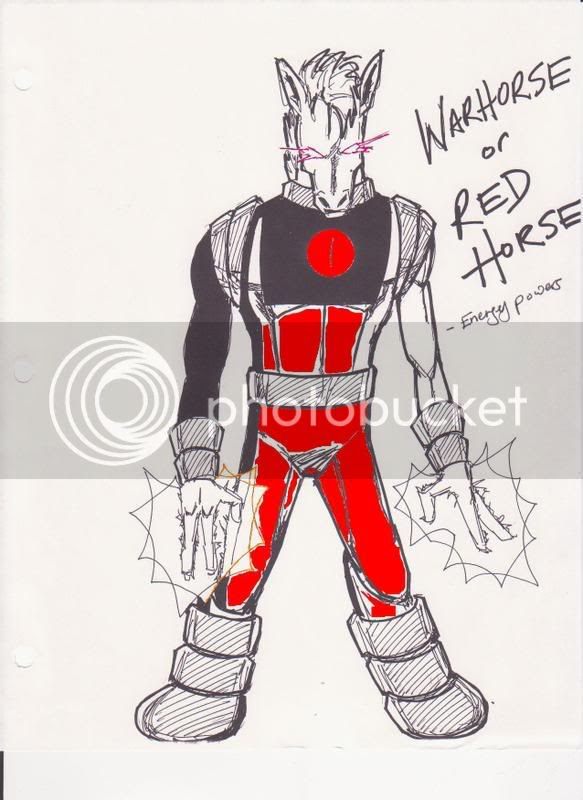 Red Horse or Warhorse: Villainous Kymellian alien with the ability to generate and project destructive energy. The symbol on the chest of his costume is the red circle for the planet Mars. I apologize for not completely coloring this piece as I'm using MS Paint - the crudest of drawing programs. 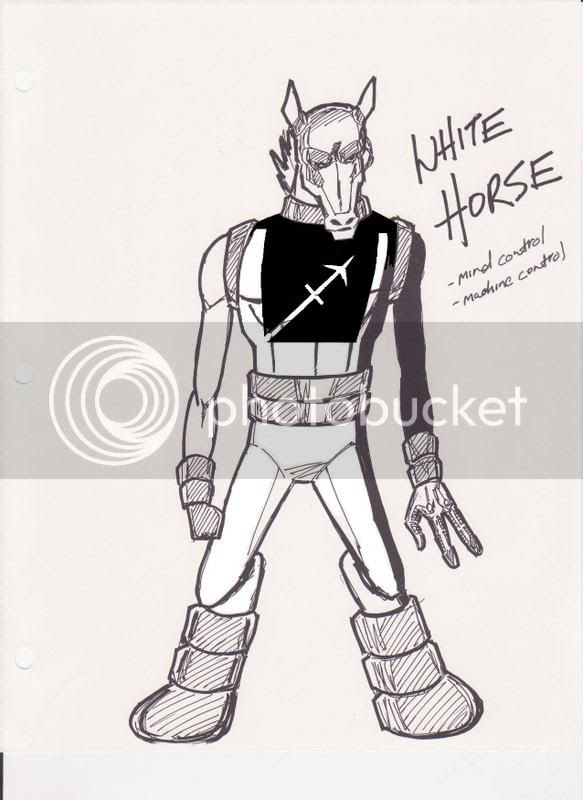 White Horse: Villainous Kymellian cyborg alien with the ability to control machines and minds. The symbol on the chest of his costume is the astrological symbol for Sagittarius aka The Archer and because the Biblical rider of the White Horse carried a bow and arrow [and either represented Conquest or the Pestilence -- I went with Conquest]. "The Four Horsemen" are tenuous allies with renegade Kymellian scientist Malus Ebonstal. They represent a power bloc within the Kymellians and are enemies of the Whitemanes [the Kymellian family with ties to Power Pack]. Also like the new Power Pack costume designs, I tried to both differentiate the costumes for "The Four Horsemen" while also using common elements like the belts and shoulder straps to tie the group together. 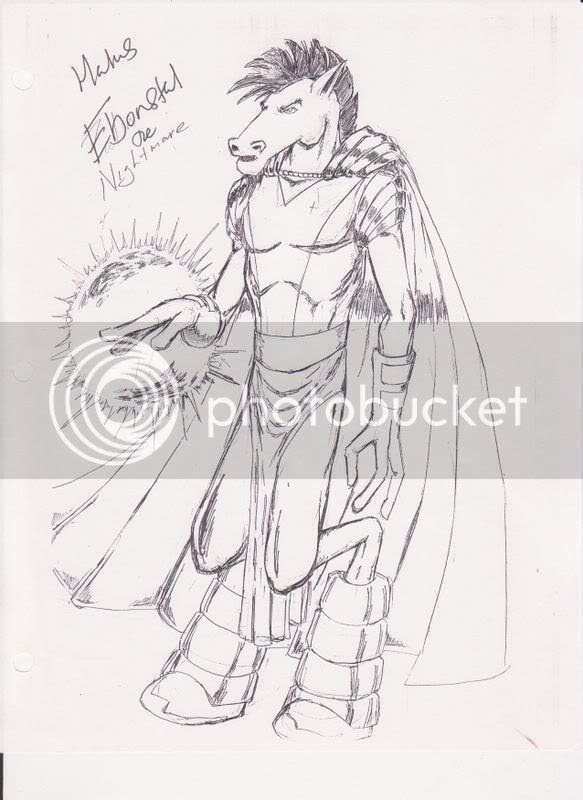 Malus Ebonstal aka The Nightmare: Renegade Kymellian scientist who views Earth and humanity as one big laboratory and experiment. He is a skilled adept of the many powers inherent with the Kymellian race including energy generation and projection, teleportation and density manipulation. He has been nicknamed The Nightmare by Jack Power. 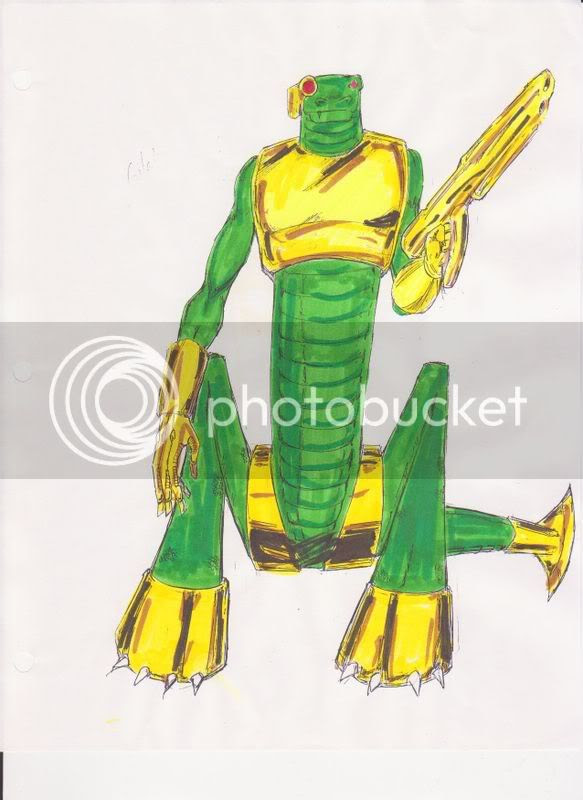 Geelah [pronouced "Gila"]: Cyborg Snark bounty hunter in the employ of the renegade Kymellian scientist Malus Ebonstal. His tail is equipped with an axe blade attachment which he uses to lethal effect. I don't know if anyone noticed but this drawing and previous drawing were done prior to the other drawings and are not as good -- I think I've since developed a style/look - have a better grasp of anatomy - no longer have a need to include unnecessary details. 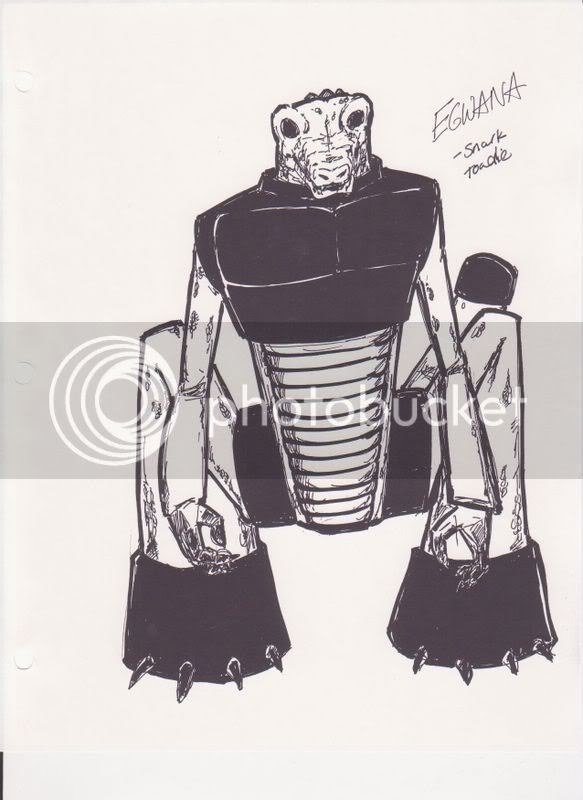 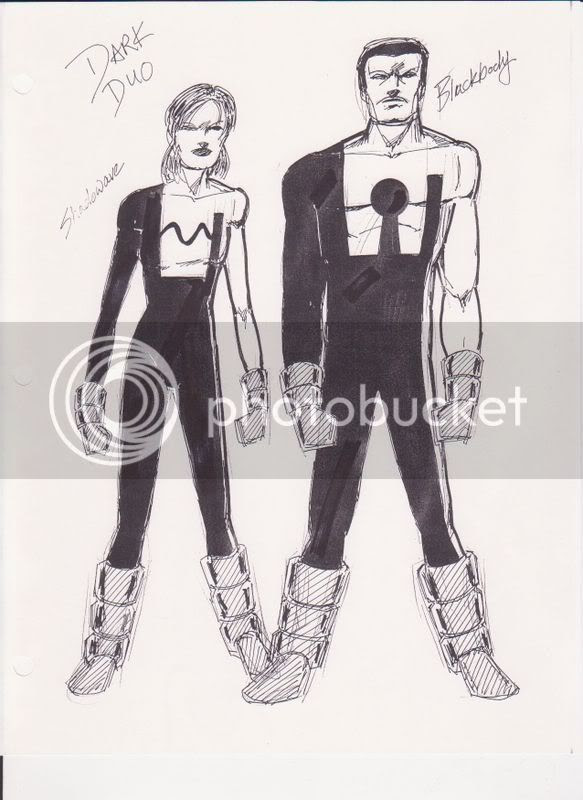 Shadowave and Blackbody: Humans endowed with superhuman powers by Malus Ebonstal. Each is capable of manipulating the extradimensional energy known as Darkforce for various effects such as flight, energy projection, force field generation and superhuman strength.

Talk to you later.

Damn, Chris. I used to be a Power Pack fan. I still have the original run. These are excellent designs.